skip to main | skip to sidebar

Smoke on the Water 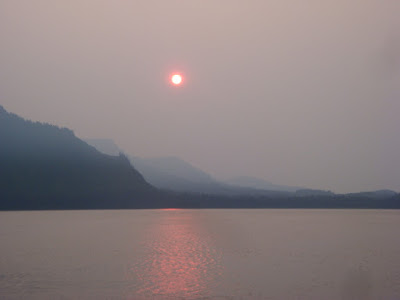 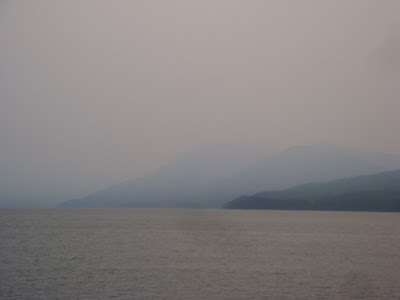 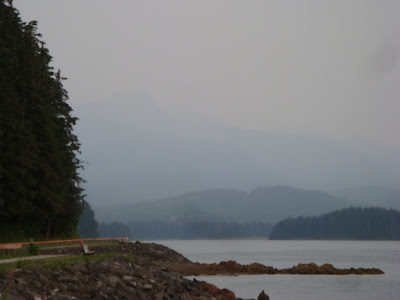 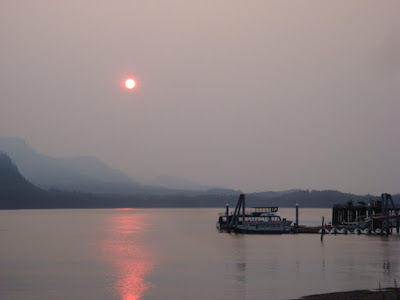 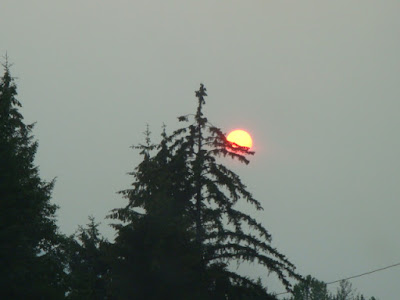 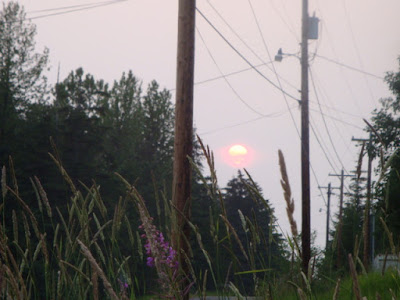 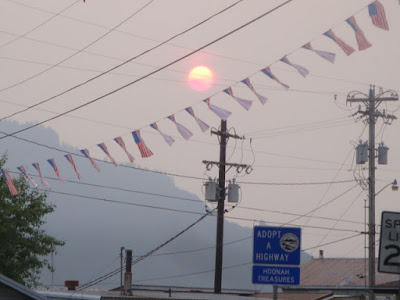 For the past three weeks or maybe a month we've had unusually hot temperatures here in Southeast Alaska. Actually it's been happening all over the state I believe. I know that eighty plus degrees doesn't sound so hot to some folks, but here, where the average temperatures range in the mid sixties to mid seventies in the summer, having the temps soar to the upper eighties was quite uncomfortable. No, it wasn't just uncomfortable, it was outright miserable, truth be known. Much like last year, there hasn't been any rain since the beginning of June, so the grass around the house was starting to dry out and turn yellow, and the creeks are exceptionally low. Not something you want to see right before the salmon show up to do their annual spawning run up the creeks and rivers. For some reason the horseflies seem to thrive on this hot, dry weather, and they were out in droves. I was fishing up the bay for King Salmon last week and the flies like to drove me nuts. I was knocking them down outside with my salt water wash down hose, and killing them by the dozens inside the cabin of the boat where they tormented me non stop. I hosed some of them right out through the scuppers and into the bay, but those sapsuckers took right off and came around for another bout with me.  I'd love to have an electric suit that I could put on and just stand out on the deck of my boat. When the horseflies landed on me, they'd fry like bacon in a hot skillet. That would be so satisfying ...at least until I splashed some water on me or it started to rain.This hot dry weather has messed up the fishing as well. I understand that the runs are several weeks late in some parts of the state, and I know that trying to catch dog salmon a few weeks ago was almost impossible unless you could get your gear down to almost 240 feet. The water temperatures are above normal, so I guess they're running deep where the temp is more to their liking. Day after day we woke up to bright sunny weather, which was refreshing on the one hand until about ten in morning when the heat would start to rev up. Then the fires up north started in. It's an annual thing for thousands of acres of forests to burn up in the interior, usually caused by lightning strikes. It appears that over in British Columbia there are forest fires too, because we've been inundated with smoke from the fires, so much so that there were unhealthy air advisories on the news. They were recommending that folks with respiratory problems remain indoors. It looked like parts of China around here, it might have made some of the tourists feel right at home. For the first time in all the years that I've lived  here, the July 4th fireworks display was cancelled. It was too dangerous. The NOAA weather station kept predicting rain and clouds and cooler weather, but time and again they would revise it for a few days later. It was all very frustrating. However, today I awoke to clouds (and smoke) and it actually sprinkled a little. When I passed by the information sign at the school the temperature was a very pleasant 65 degrees, much more to my liking. Everyone keeps asking me how I'm going to make it in Idaho if I can't handle the weather here. Believe me, I've wondered that myself, and lately I've been starting to lose a little sleep thinking about it. I guess the answer is air conditioning. We'll see.
Posted by tbbotts at 6:31 PM 2 comments: Links to this post

tbbotts
I was born in Marion Ohio where I lived for nineteen years. I joined the navy and served four years, homeported in both Key West Florida and Charleston S.C. My wife and I became affiliated with a religious group and eventually joined up with some of the members in Hoonah. When I discovered that people would pay me to catch fish, I bought a commercial license and have been involved in the fishing industry since 1978. About 2001 I started writing about my experiences at Game Creek, the religious community where I lived with about 120 other people. That's how Wilderness BLues came about. My wife and I have seven children and soon to be ten grandchildren.